This is the first in a series of three columns.

Among its findings are that women make up a large majority of residents living in poverty, women in the county earn, on average, 82 percent of wages paid to men and median incomes are lowest for single-parent households headed by women.

One more fact that would fit neatly into the report but is not mentioned is one that is within the purview of county leaders.

The county’s gender pay gap is interesting considering the level of regimentation in the county’s pay system.

The county uses a system of salary scales with grades, ranges and maximums for its various personnel units, including coverage of management and seasonal employees.

Additionally, most county employees are represented by one of three unions in collective bargaining.  Each of these unions is known for their aggressive representation of members and they possess significant political power.

Employees with union representation can take advantage of a grievance procedure that can proceed as far as arbitration.  Employees in the merit system can also bring grievances to the county’s Merit System Protection Board.  All of these factors together give county employees far more protections than the huge majority of private sector employers offer and limit (but not completely eliminate) management discretion over individual employee wages.

Despite all of the above, the gender gap in county employee pay persists.  Whether county leaders know about it is a different question.  A 2017 presentation by the county’s Office of Human Resources to the County Council reported that female county employees were paid an average salary of $77,750 in 2016, more than the average of $75,725 paid to men.  But that data is misleading because it omits part-time employees and does not include either gross pay or overtime.  When those factors are included, the picture changes – a lot.

Datamontgomery, the county’s open data site, contains county employee payroll files for 2014 through 2018.  Each file contains employee name, gender, current annual salary, gross pay received, overtime pay, department, division, full/part-time status, position title and date of hire.  Race and Latino status are not included.  Employees of affiliated county agencies like the public school system, Park and Planning, Montgomery College, the Housing Opportunities Commission and the Revenue Authority are not included.  Gross pay received can be lower than current annual salary if the employee only works for part of the year, but it can be higher if the employee receives overtime.  Each of the three pay categories – salary, gross pay received and overtime – should be considered in assessing pay. 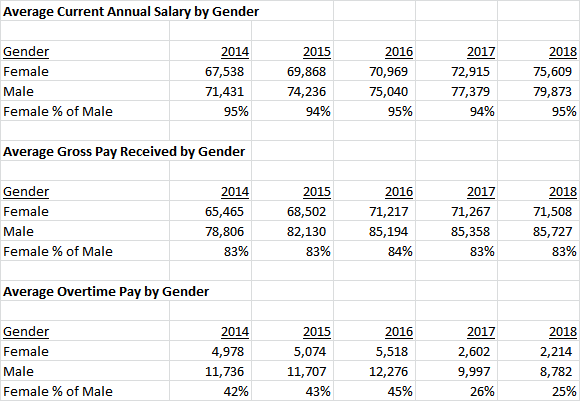 The 83 percent of male pay earned by female county employees is almost identical to the 82 percent differential found by the Commission for Women report for all female county residents.  That’s striking considering the level of formality and protection outlined above in the county’s pay and personnel systems.  Why does this gender pay gap exist in county government?  We’ll examine some of the causes in Part 2.

(Author’s note: thank you to former County Council at-large candidate Danielle Meitiv for bringing this data to my attention.)