A $20 million, 28,000-square-foot addition to John F. Kennedy High School has received approval from the Montgomery school board, and plans include adding a community wellness center to the building.

A joint venture between the school system and the county Department of Health and Human Services, the project aims to increase academic programs available to students at the Glenmont school, which features a mix of academy and international baccalaureate programs. Academy programs include broadcast journalism, business management and health professions, among others.

“This expansion comes at a time where we are excited to grow and expand learning opportunities and engage students in a new and exciting 21st century modern space,” Kennedy Principal Joe Rubens said.

Construction on the project is to begin early next year and expected to be done in mid-2022.

Included in plans are 19 classrooms, special education rooms, technology labs and staff offices. The project will increase the school’s capacity from 2,100 to 2,221. Rubens said capacity isn’t an issue at the 1,789-student school yet, but the addition will help curb future crowding problems.

The three-story addition on the western edge of the building was designed by Delmar Architects, an Olney-based company that specializes in school projects. Delmar designed recent projects at Springbrook and James Hubert Blake high schools in Silver Spring. 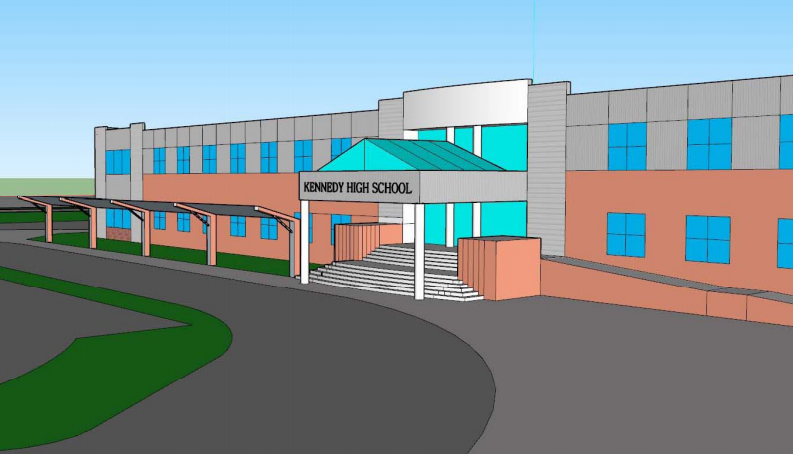 A canopy over the main entrance to signal the public entrance caught school board members’ attention, who said it’s difficult to tell where the public is supposed to enter other county schools.

Simultaneously, work will be done to install artificial turf at Kennedy’s athletic fields. Turf fields at about 10 other schools have drawn speculation from community members who question associated health and safety risks.

The 3,300-square-foot wellness center will be available to students and their families and provide a variety of services including sports physicals, immunizations, primary care, vision and hearing and mental health care, Health and Human Services spokeswoman Mary Anderson said.

People who visit the center during school hours will be required to check-in at the office, and services will also be available when school is not in session and community members will be able to access the facility through a separate entrance.

Similar school-based wellness centers are at Northwood, Gaithersburg, Wheaton and Watkins Mill high schools and services offered at each varies slightly based on the needs of the students in that community and their siblings, Anderson said.

School-based wellness centers are generally implemented in communities with high concentrations of low-income families, Anderson said. About 80 percent of students enrolled at Kennedy are eligible for free or reduced-price meals from the school.

“What we’re trying to do is make sure kids have access to the services they might need,” Anderson said.

Caitlynn Peetz can be reached at caitlynn.peetz@bethesdda-remix.newspackstaging.com