A county examination of after-school programs in elementary schools has found significant disparities based on income, parent involvement and access to transportation.

A report released this week by the County Council’s Office of Legislative Oversight shows the 77 elementary schools with more than 25 percent of students eligible for free or reduced-priced meals had nearly 5,000 fewer after school program bookings than the 56 schools with lower rates of poorer students.

Fifteen schools with reduced-priced meal rates higher than 75 percent had 9,390 bookings compared to 37,072 in the 56 schools with the lowest percentage of students eligible for lunch subsidies, often used as a measure of a neighborhood’s wealth.

Typically an after-school program provider has to get a permit for a room reservation and each permit is considered a “booking,” according to the report by the government oversight office.

County Council members requested the review to understand where the greatest needs are and where more money should be allocated to promote “robust, comprehensive and inclusive” programs to ensure all children will have an affordable after-school opportunity, said Hans Riemer, an at-large council member.

The report is a starting point to begin shaping a countywide plan to expand programs and access, he said.

“I think it plays out in social well-being in so many different dimensions,” Riemer said. “We’re a community that in the past I think there was a general feeling that families could provide for themselves and take care of themselves on these kinds of issues. That was probably the case 40 years ago but today it’s not and we need to ensure every kid has a safe, productive place to be.”

The school system has focused in recent years on closing the achievement gap in academic performance between white and minority students, looking to changing school boundaries to integrate communities and implementing programs to provide increased support for at-risk students.

In 2008, the school system and the county Recreation Department created the Excel Beyond the Bell program, an initiative that brings community groups together to provide “high quality, accessible” out-of-school activities for middle school students.

The report recommends county and school officials consider expanding the Excel Beyond the Bell program, now available at six elementary and eight middle schools, to more locations with high rates of students eligible for reduced-priced meals, at an estimated cost of $269,000 per school.

There are 133 elementary schools in the Montgomery County school system.

Other options include providing after school activity transportation, which averages $4,490 per school for one day of transportation per week, according to the report and reducing the cost of facility fees at Title I schools, which generally have high concentrations of poverty. 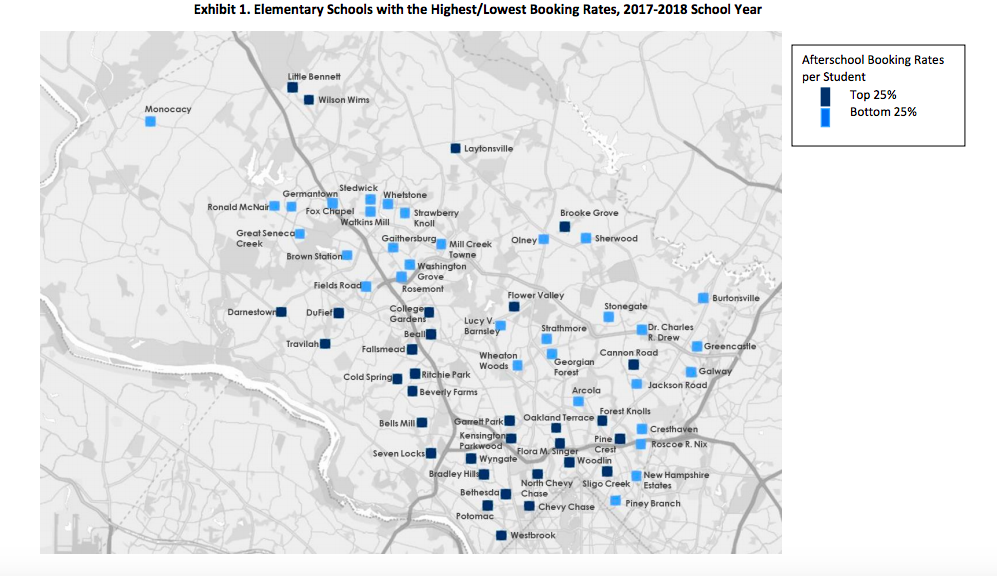 Renting a classroom or gym space for after school programs ranges from $7 to $12, with kitchens costing about $40.

Riemer said he believes the council can find areas of savings in the county’s proposed $5.6 billion budget, which could be put toward funding more after school programs. The budget, proposed by County Executive Marc Elrich last week, underfunds the school system’s fiscal 2020 funding request by about $14 million.

“We’ll find ways to save money in this budget and reallocate spending toward important priorities that weren’t addressed,” Riemer said. “This will be one of those high priorities for me.”

When the school board completed its proposed fiscal 2020 budget in February, it included $50,000 for after-school programs at “high-needs elementary schools” to begin exploring ways to provide more opportunities throughout the county.

Caitlynn Peetz can be reached at caitlynn.peetz@bethesdda-remix.newspackstaging.com