Last week, the Washington Post reported that County Executive Marc Elrich had narrowed his choices for the next Montgomery County police chief to former Portsmouth, Virginia chief Tonya Chapman and current Takoma Park chief Antonio DeVaul.  Of the two, the Post designated Chapman as the front runner.  Her tenure in Portsmouth produced numerous media reports that are useful to examine in deciding whether the county should hire her.

First, let’s examine the differences between Portsmouth (located in Virginia’s Hampton Roads region) and MoCo.  Portsmouth has roughly one-tenth of MoCo’s population and about half our county’s median household income.  It is a majority-black jurisdiction and its Asian and Hispanic populations are small compared to MoCo’s.  It has significantly higher crime rates than MoCo and more sworn police officers per capita.  Despite the differences between the two, Chapman has more than 20 years of experience as a police officer in Arlington, Virginia – a jurisdiction with many demographic similarities to MoCo’s down-county region. 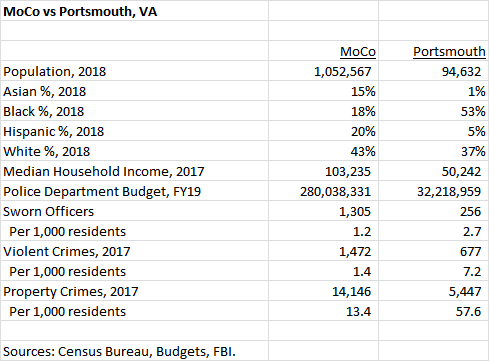 After her tenure in Arlington, Chapman served short stints in Richmond’s Department of Social Services and as a deputy chief in Richmond’s police department.  She was named deputy secretary of public safety and homeland security in the administration of Virginia Governor Terry McAuliffe.  Chapman was named as chief of police in Portsmouth in February 2016, the first black woman in that position in the city’s history.  She would last roughly three years.

Chapman’s tenure was marked by several events that were covered by Portsmouth’s news media.  They include:

Are you ‘just a job’ employee or a ‘Team Player’? (See attachment)

Some of you complained that morale was low before I came and I am sure you will complain that it is low when I depart.  Stop blaming others and look introspectively as to why you run through so many police chiefs and employees.  Some of you allow a few toxic employees to contaminate the whole environment.  Check yourself, especially if you consider yourself a formal or informal leader in this organization. 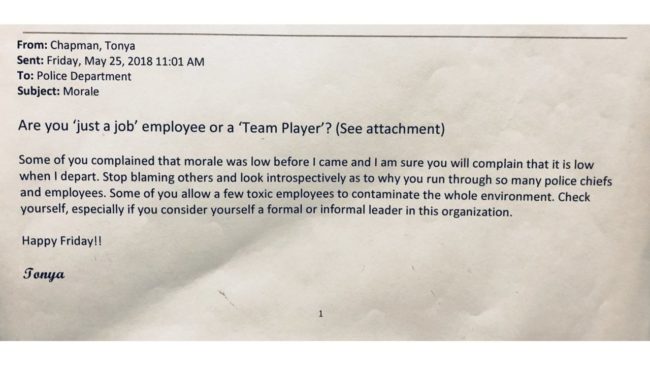 Anonymous officers went to a local TV station to complain.  One officer said, “We are completely unconfident that our department will have our back… Why are we going to put our lives on the line for a city that doesn’t care?”

On March 18, 2019, local media reported that Chapman had resigned.  The next day the Portsmouth NAACP alleged that the resignation was forced by the city and demanded an investigation, attributing it to “systemic racism.”  Chapman then confirmed that she was forced to resign.  In a four-page statement to the public, Chapman said of the police department, “I have never witnessed the degree of bias and acts of systemic racism, discriminatory practices and abuse of authority in all of my almost 30 year career in law enforcement and public safety.”  She described resistance by some officers, saying, “Some quite frankly did not like taking direction from an African American female. Further, I would contend that there were some politically connected individuals that never had confidence in me in the first place.”  She also described in detail how the city manager told her that she must sign a resignation letter or be fired.  (Both the city manager and Chapman’s successor are black women.)  Finally, she took credit for decreasing crime rates in the city.  (Crime rates fell in 2018 but were on the rise as Chapman was leaving.)

That was not all.  Chapman also told a local TV station that the police union had plotted to get rid of her and that she had turned over evidence of racism in the police department to the FBI, which is now investigating city police.  It was later reported that the president of the local police union had called Chapman’s chief of staff (who was black) a “trunk monkey.”

The city manager described her departure as “an employment issue based solely on concerns with leadership of the department” with no further elaboration, leaving Chapman’s version of events largely unchallenged.  It’s apparent that Portsmouth’s police department had problems like many other departments around the country.  But did Chapman help the department overcome those problems?  Were tactics like her May 2018 email effective in building morale?  And how will police officers in a new department, like MCPD, react to a leader who has shared derogatory information on another department she has previously led with the FBI?  Finally, can Chapman provide the stability that our county’s police desperately need in the wake of a stream of bad publicity?

These are the questions that our County Council needs to ask if Elrich nominates Chapman to lead MCPD.