Editor’s note: The views expressed in MoCo Politics are the writer’s and do not reflect those of Bethesda Beat staff.

Here’s the short version of two articles by Bethesda Beat’s Dan Schere on a recent session of the County Council about the executive branch’s proposal for a two-year budget process.

Council: We don’t know if we can trust you guys.

Exec Branch: OK. We have this great idea.

Council: We don’t know if we’re ready for that.

Folks, if that comes across as a fail, that’s exactly what it was.

The relationship between the executive and legislative branches is one of the most crucial elements in the proper functioning of county government.

I was a chief of staff at the council from 2010 through 2014, during the second term of County Executive Ike Leggett. We called the two branches the two sides of “the street” – East Jefferson Street, which separates the council and executive office buildings.

Each side of the street had a complicated view of the other with a range of revolving elements: bemusement, bafflement, tolerance, competitiveness, wariness, weariness, curiosity and ultimately (sometimes grudging) cooperation.

Each side thought it did the heavy lifting of government and cleaned up the messes created by the other side. (Probably both were right!) Each side gossiped about the other.

The hardest gossip items to get were the ones from across the street. They turned out to be the most valuable.

Communication between the sides of the street was constant.

The executive’s people – I called them “Ikelings” – were constantly in our offices shopping policy proposals. They would bring ideas over, hold meetings with all nine council offices, then return to their side of the street to compile intelligence. If the idea needed to be refined, they would tweak it and bring it back.

If a couple of rounds of this failed to produce a shot at five votes, most of the time they would junk it and move on. For the most part, they understood they couldn’t go it alone on a proposal that a majority of the council opposed.

We reached out constantly to them, too. If we had a technical issue involving a department activity, we called the department heads. I don’t remember ever having a problem with getting a response.

If we had a political issue or wanted to know the executive’s thinking on something, we called his special assistant, Joy Nurmi.

Joy was an ex-journalist who had been a chief of staff to multiple council members and had complete access to the boss. Either Joy knew what was going on and would tell us or she would find out and get back to us – fast. In that sense, she was just as much of a resource for us as she was for Leggett. (Joy has returned home and is now Council member Gabe Albornoz’s chief of staff.)

The relationship wasn’t perfect. It was occasionally strained by differences of opinion, miscommunication and politics.

But these problems were eased by longstanding relationships between staffers, the fact that many Leggett department heads had been around a long time and had records of running their agencies well, the fact that Leggett personally refrained from responding to provocations and the general sense that fighting would only get us so far.

The Ikelings would bust my chops, but I knew they had the county’s best interest at heart, even when we disagreed about how to get there.

As for Leggett himself, he had a useful knack for staying out of fights he did not need to be in. For example, he mostly avoided master-plan battles unless the county had a direct legal or property-owning interest in them. That was smart!

Despite our differences, the two sides of the street would band together against common threats – and boy were there a lot of them.

The Great Recession, threats to our bond rating, fights with the employee unions, battles with the state over funding mandates and lawsuits against the county were reliable unifiers. Against external challenges like those, we were in it together and no one was allowed to mess with us.

After I left the council, I was sometimes the common threat! Some of my less charitable columns produced angry phone calls and texts from executive branch officials and council people, occasionally minutes apart. For all I knew, they were tag-teaming me!

It seems that this relationship has degraded during the new administration.

In an extraordinary memo reprinted below, Council President Nancy Navarro not only criticized the executive branch for its slow pace in appointing department heads (as previously reported in Bethesda Beat), she also asked for clarification on the role of the executive’s special assistant, Dale Tibbitts. (Dale was County Executive Marc Elrich’s chief of staff at the council and now has Joy’s former position in the executive branch. No one questioned Joy’s role as Leggett’s consigliere.)

And Navarro wrote this:

Finally, I must express my concern about the delay in receiving notification of emergency events in the County. More often than not, we learn of these events from media reports rather than directly from the relevant department. Council staff have developed a protocol ensuring timely notification for elected officials when there is an emergency event which is waiting for Executive input and concurrence and I believe this should be given immediate attention. 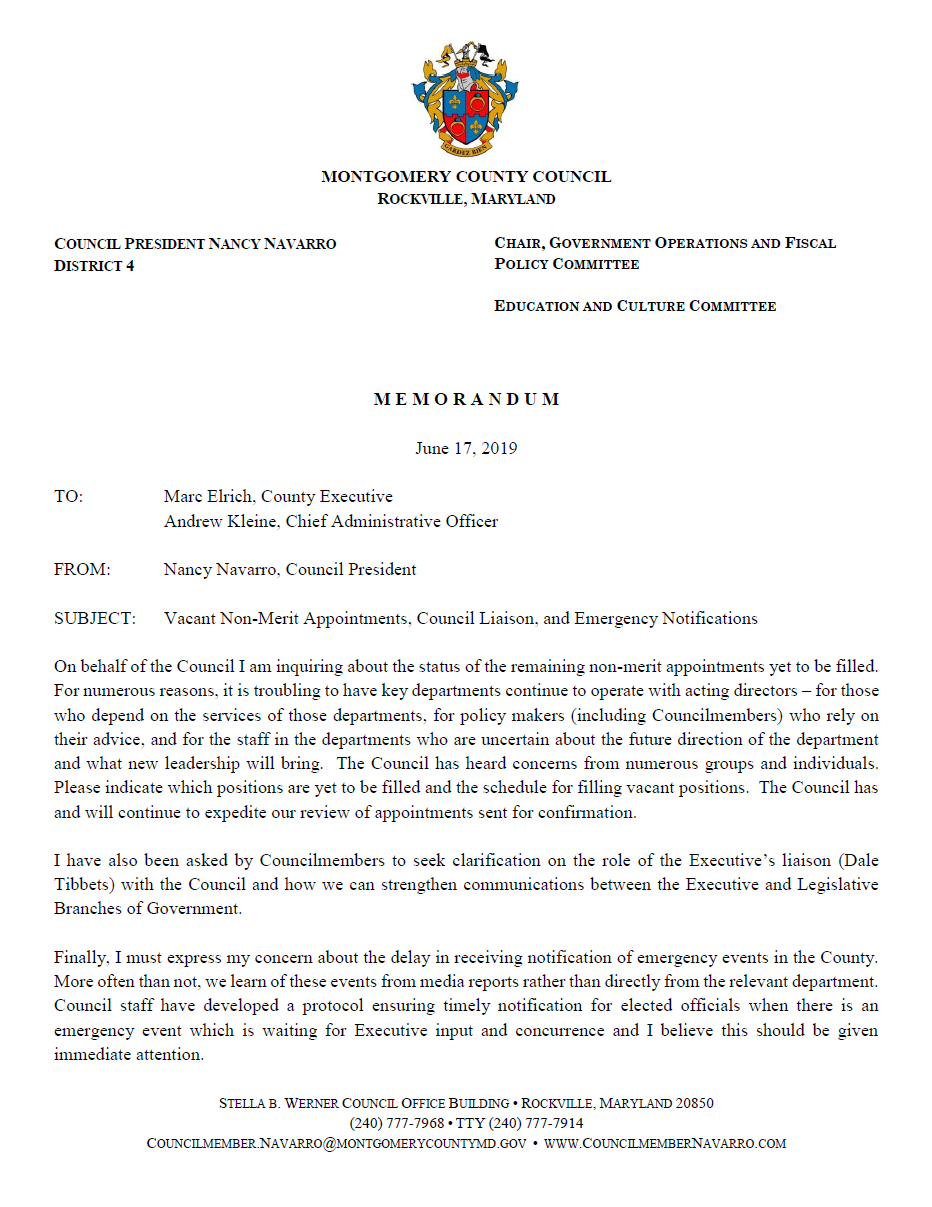 Navarro was not merely writing for herself; she was representing the view of the full council.

To its credit, the executive branch responded eight days later with a nominee interview schedule and an emergency notification plan. But during the Leggett administration, Navarro’s memo likely would never have been written in the first place. Its very existence is the sign of a problem.

Based on what I am hearing, my reminiscences above seem quaint and almost obsolete. Communication does not flow across the street as freely as it once did. (Some in the council building even wonder how well communication flows internally in the executive branch!) Grumbles that were once fleeting and private are now becoming public and more lasting.

I’m not blaming Elrich’s team for everything. The truth is that the council is a difficult institution to know.

It has nine offices headed by nine very different people, at least a couple of whom want Elrich’s job. It has internal rivalries and fluid dynamics that can change quickly.

It takes tremendous, constant work to keep up with what is happening there. But right now, that work does not appear to be going on like it should.

That needs to change. The council has vast powers under the county’s charter. Unless communication improves, I expect the council to start using them aggressively – all of them. Executive branch, beware.