Skip to content
Home » Opinion: Kleine on the Line

Editor’s note: The views expressed in MoCo Politics are the writer’s and do not represent the staff of Bethesda Beat.

As Montgomery County’s chief administrative officer, Andrew Kleine is the most powerful non-elected employee in county government. He runs the government on a day-to-day basis, supervising all department heads and directors of principal offices, and he reports to just one person: County Executive Marc Elrich.

But Kleine got hit with two revelations this week: an investigation by the county’s ethics commission and a letter three powerful county employee unions sent to Elrich, critical of Kleine. Kleine is now the subject of uncomfortable scrutiny inside county government and beyond.

Soft-spoken, bookish and a bit awkward, Kleine is a proud budget nerd. He was the Baltimore city’s budget director from 2008 through 2017.

Kleine wrote in his book, “City on the Line”: “If I were a superhero, I would be called Good Government Guy. … When a mayor needed help, I could remove my jacket and tie and rip open my button-down to reveal a T-shirt with GGG emblazoned across the chest.”

Ominously for his tenure in MoCo, Kleine did not have a great relationship with Baltimore’s City Council. In his final year with the city, the council voted to defund his entire office in a budget dispute with Mayor Catherine Pugh.

The council also targeted Kleine’s cherished innovation fund with a $770,000 cut. According to The (Baltimore) Sun, “Once a budget deal was finally reached, City Council President Bernard C. ‘Jack’ Young said he thought Mayor Catherine Pugh and the council had the same priorities but that Kleine’s office had come between them.”

Months later, as Kleine was headed out the door, Council member Eric Costello offered this comment on his successor: “My sincere hope is that he takes a more collaborative approach with the council than his predecessor.”

Kleine now has two major problems. The first was described in a Bethesda Beat story on Sept. 9. According to the story, one of Kleine’s former business partners was awarded at least one county contract once Kleine became CAO. The contractor then promoted sales of Kleine’s book as Kleine cheered it on.

Among the facts currently unknown are how many contracts this contractor now has with the county; their award amounts, durations and scopes of work; whether any of them were sole source; and the degree to which Kleine was personally involved with them.

One interesting fact is that Sec. 11B-14 of the county code says any sole-source contracts can only be awarded with a written determination by the CAO. Also unknown is Kleine’s version of these events since the county did not comply with six different requests by Bethesda Beat to interview Kleine before the Sept. 9 story was published. Kleine later declined to talk about the matter because the county’s Ethics Commission was looking into it. 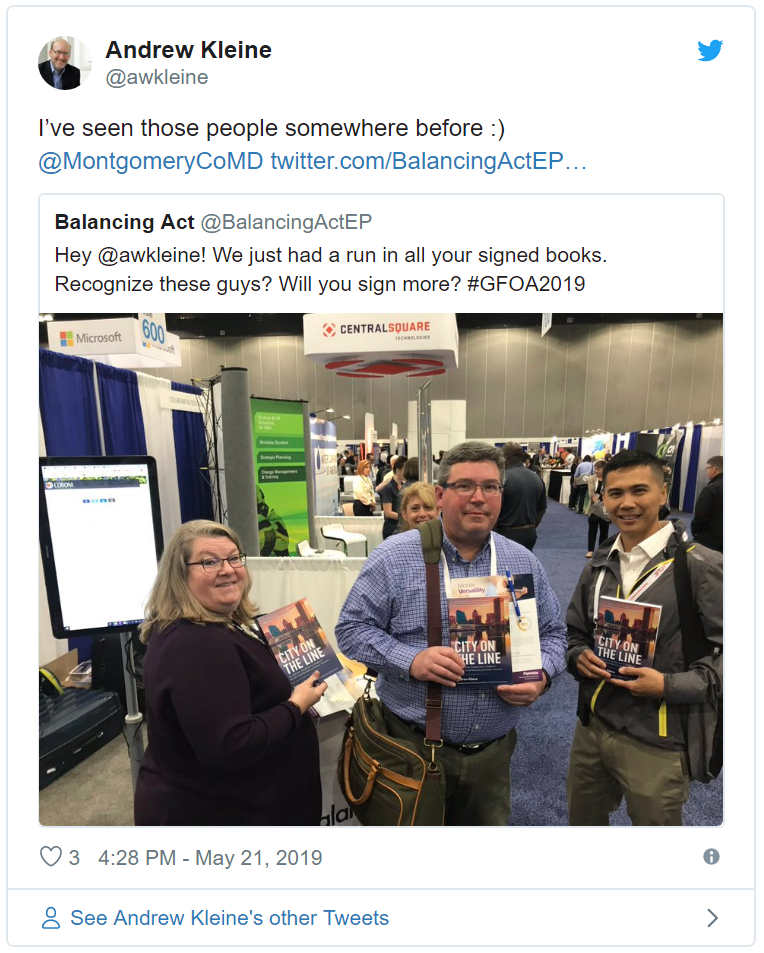 A county contractor promotes sales of Kleine’s book in May. Kleine types a “smile” in his response on Twitter.

Kleine must realize that he and all future occupants of his position will inevitably be compared to Tim Firestine, who served as CAO during former County Executive Ike Leggett’s three terms in office.

Firestine first went to work in MoCo government in 1979, two years before the current executive office building was completed. He worked his way up through the county’s Office of Management and Budget before becoming finance director in 1991.

Few people, if any, know more about how the county government makes and spends its money than Firestine. Squeaky clean with a steady stare, a vaguely menacing smile and a dry, intermittent sense of humor, Firestine was not someone who would slap you on your back, buy you a beer and be your best buddy. But he got the job done.

When asked what lesson could be learned from working for Firestine, one of his former subordinates told me, “Chill. Be cool. Don’t overreact.” No one ever questioned his intelligence, competence or integrity.

Of the differences between Kleine and Firestine, five stand out.

First, Firestine had 27 years of experience in MoCo government when he became CAO. Kleine had worked for other organizations, but not for MoCo government.

Second, Firestine had known Leggett for at least 15 years when Leggett tapped him to lead county government. Elrich and Kleine don’t have that kind of history.

Third, Firestine was no innovator. He wanted the trains to run on time. Kleine, in contrast, is definitely an innovator who wants to introduce new concepts like a two-year budget and outcome budgeting to the county. His signature initiative is the Innovation Fund, an internal revolving loan fund intended to subsidize efficiency experiments in county departments. Such concepts are sure to draw opposition from the entrenched bureaucracy.

Fourth, Firestine was a low-key staffer who did not get ahead of his boss and scrupulously avoided anything smelling of politics. Kleine asks anyone in earshot to read his book and sometimes acts like a management celebrity.

And finally, Firestine would never have been caught up in a potential conflict of interest with a contractor and book sales. One reason is that the only book Firestine would have ever written would be a boring manual on personnel regulations or municipal bond sales that no one would ever read! 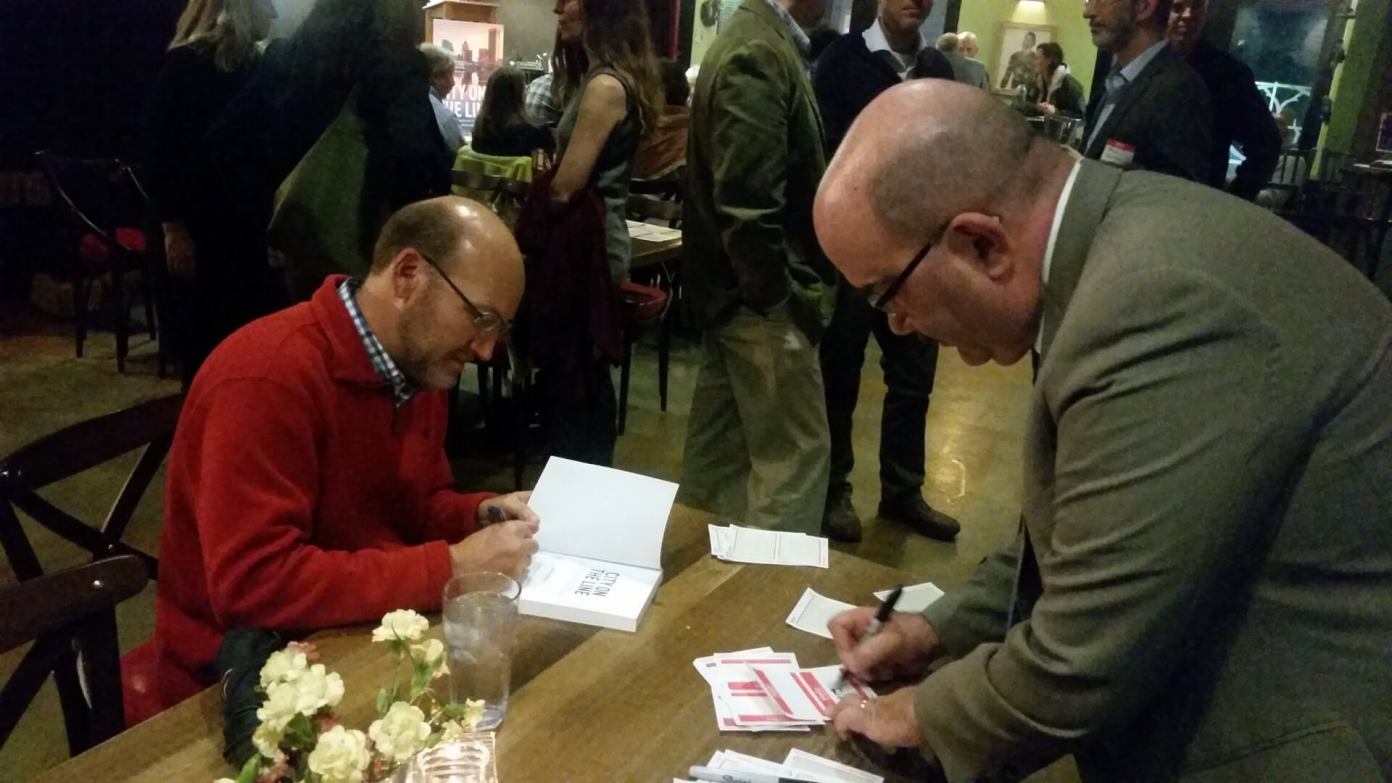 It’s hard to tell how much merit the unions’ allegations contain, but two facts are undeniable.

First, without labor support, Marc Elrich would not be county executive. And second, Elrich depicted his relationship with labor as a chief reason why he should be elected.

In a 2018 op-ed in The Washington Post, Elrich wrote, “Far from saddling taxpayers with higher bills, I will streamline county government. Unions and their members, our county’s workforce, know and trust me. That is why we announced our plan to restructure county government together. Our county is facing difficult financial times; without thoughtful changes, employees will face across-the-board cuts.”

One wonders about the state of this purported restructuring given that Kleine is key to the effort and the unions obviously distrust him.

Andrew Kleine is a smart guy with interesting ideas and a lot to offer. But we are now at a big moment. The chief administrative officer is the single most critical non-elected employee of county government. He or she must be beyond reproach and in total alignment with the county executive’s priorities.

The controversy over Kleine’s former business partner and his book sales, as well as the scathing letter from the unions, calls into question whether this is the case with Kleine. Elrich must resolve these issues one way or another or his administration will pay the price.