It was the beginning of April, just days after the coronavirus outbreak had tossed students across the country headlong into a massive distance learning experiment.

Debra Moore, an English teacher at Westland Middle School in Bethesda, tasked Ella Welch and her eighth-grade classmates with channeling their pandemic-induced emotions into something productive — a poem.

For Ella, 14, that class assignment quickly grew into a much larger project. In less than two weeks, that poem became “Six Feet Apart,” an e-book published on Amazon, complete with Ella’s own illustrations. It’s a Kindle edition and costs $4.99.

Its verses, spanning seven pages, are rife with feelings of frustration and sadness, a cathartic expression of a student’s newfound isolation.

Ella said the creative process was slow going at first.

Ella said the first few lines of her poem came to her quickly. “Shuffle, shuffle go the feet of those who depart/Everyone watches as the people dart,” the poem begins, alongside an image of a crowd of disembodied legs and feet.

She said those stanzas were inspired by how people started to interact mid-pandemic, fleeing from each other and into quarantine.

Ella said she spent the next few days struggling to write more. She had spent plenty of time in school analyzing writers like Shakespeare, but far less actually writing poetry.

She credited her younger sister, Zola, with helping her get out of that artistic rut. “She’s more of the writer in the family, I’d say,” Ella said.

When she finished the piece, Ella showed it to her mom, Kathy Welch.

Welch told her daughter that not only did she feel the poem was good, but it could be a published book, if Ella put her mind to it.

The young poet hesitated at the proposition. “I was like, ‘I don’t know if that’s a good idea,’” Ella said.

But Ella’s mom kept with the encouragement, telling her daughter it would be good for her to try to aim for that loftier goal.

“I encourage both my children to go the extra mile. Always,” Kathy Welch said. She said she wanted Ella to know that by sharing her experience being “cooped up,” she could help others going through the same thing realize that they weren’t alone.

People in the U.S. and other countries have purchased a copy of her daughter’s poetry, she said, including England and Canada. Ella said she has sold roughly 50 copies.

“[Ella] was able to see the value of her work and it gave her a big confidence boost,” her mother said.

The poem delves into familiar tribulations through a mix of rhyming and free verse.

“The sun and blue sky are calling, you’re tired of your confines/It looks like a lovely day,” Ella wrote underneath a depiction of a mockingly cheerful sky.

Elsewhere, Ella compares herself to a “caged chicken.” The accompanying illustration shows a hapless bird rooted in place by a ball and chain, holding a sign that says “Not Free Range.”

In June, the coronavirus pandemic is still affecting Ella in many of the same ways now as it did in early April.

She used to play soccer at Westland Middle and spend time with friends. Now she watches TV.

And while some friends have inquired about hanging out, Ella and her family are being stricter with social distancing.

So for now, Ella only chats with her friends over FaceTime. 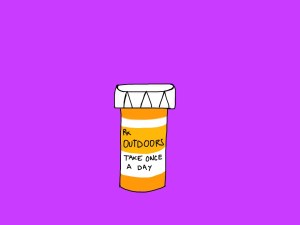 Some of Ella’s stanzas reflect an exasperation with the public health measures, such as social distancing and wearing masks, that have so radically affected her social life and forced her to stay inside. “Requests that appear pointless,” she calls them in the poem’s first verse.

Another verse, under a prescription bottle labeled “Outdoors”: “Opening the door to your freedom, you are stopped by warning looks/No, you cannot go, they say/You must sit at home and stay/Only go out once a day/Six feet apart, six feet apart.”

“I think, since this was written in the earlier part of lockdown, [the poem] was mainly written with a hint of annoyance and anger,” Ella said. “It was the mindset of someone who was really not fully informed of what we were really going into lockdowns for.”

Ella said she feels much differently about the health measures now, having educated herself by reading articles and watching the news.

“The results are there. The more people wear their masks, that stay inside, the more this thing goes away,” she said.

Ella, now a rising high school freshman, isn’t in a rush to pen a follow-up; writing and disseminating her first piece were stressful enough, she said.

“I think as much as my mom’s encouraging me, I think I’ve done enough publishing for right now,” she said.